The bones of the house are the same. The color is different; it was white when I lived there. 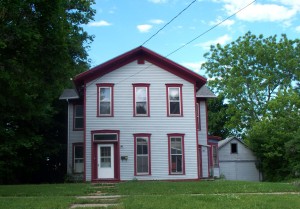 I remember a well-tended lawn with shrubs in front, all neatly trimmed.  An affordable residence for two young women on their own.

The second floor apartment on the right side included a living room, a kitchen, one bedroom, and a bath.  Across the hall was another tenant, one we never saw.  Our elderly landlords lived downstairs.  They provided us with a refrigerator, and heat through cast-iron radiators – when they were at home.  We furnished the rooms with two used metal-framed beds, an old oak kitchen table and, for living room relaxation, bucket seats pulled from a junked MG.

December 26, 5:30 pm – After a long day at work, I keyed open our front door.  I wore a rust-colored corduroy dress and heavy wool coat.   I first saw him with a book in his hands, leaning back in the MG’s bucket seat on the living room floor.  As I entered the room, he looked up.  “Hello,” he said.  I returned his greeting.   Much later he would tell me his first sight of me was my legs.

He was a friend of my roommate’s fiancé, a college student, visiting him for a few days.  We saw each other a lot that weekend.  A week or so later he called me from Milwaukee.  We talked for over an hour.  We began dating, often long distance through real letters and phone calls.  No emails then.  Our reunions were magic.

One thought on “First Meeting”