A few days ago I wrote about Hylda Schmeling whose charming photos I’d discovered in a Goodwill store.  I relayed details of her life that I’d found in a quick online search. 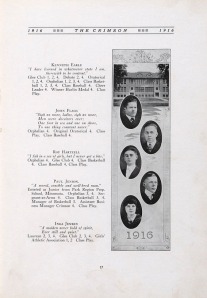 Hylda so intrigued me that yesterday I spent an hour or so researching her husband.  It occurred to me that he’d probably graduated from her high school.  Sure enough that’s where I found him, in the pages of The Crimson, their 1916 high school yearbook.

Next to Paul Jenson’s picture, the caption read “A moral, sensible and well-bred man.” It went on to say that he’d entered as a Junior from Park Region Prep School in Minnesota.  In the two years he attended the high school, he was active.  Along with the class play and other activities, he played basketball and was assistant business manager of The Crimson.

The class prophecy jests that he would be President of the Hole-Proof Sock Factory. Another humorous entry jokes about his love of silk socks.  His nickname, like his future wife’s would be, was “Jens”.  His virtue was his good looks, and his favorite expression was “dammit”.   (A more innocent time. :smile:)  He was voted the “greatest doll” and, in a section called “Wouldn’t you like to see”…it reads “Paul Jenson not all dolled up.”  Vivid images.

Jody Allen, a WisRWA friend, suggested I search for Paul’s military records.  The only listing I found at Ancestry.com was a copy of his draft registration for World War I.   It was signed June 5, 1917, nine days before his marriage to Hylda Schmeling.  So it was a military wedding of sorts.  He was leaving for war; they wanted to marry before he left.  Can you imagine their emotions?

I took another look at census records and found him in the 1900 and 1910 records. His father was from Norway; he’s listed as a Bank Cashier. In 1920, I found Paul and Hylda Jenson living in Edgerton, Wisconsin.  So he did make it home from the war! As his father was, he too was a banker.

After that I can find nothing more of Paul and Hylda.  I’m not sure I want to.

From these raw tidbits of information, I feel I’ve come to know enough about the couple to create outlines.  From there my story will morph into the fun stuff of fiction.  She’s the musically gifted daughter of a well-off German immigrant.  He’s the son of a Norwegian banker who’s just returned from the horrors of fighting in WWI.  As I ponder these two personalities and their backgrounds, a conflict takes root.  A new story begins. ∞