When we planned the itinerary for our May trip, it seemed logical.  Nothing really amazing, just a practical way to attend two family events in a limited amount of time.

Our initial flight took us to Charleston, South Carolina and to a rented house set up on a hill the second row in from the ocean in Folly Beach.  From our porch each morning and night we saw, heard, and smelled the awesome salty breezes of the Atlantic.   It was our first visit to Charleston, a city of refined southern charm and beauty.

We took a harbor cruise to see Fort Sumter where, 150 years ago, the shots were fired that started the Civil War.  The War, as true southerners still call it, was to be over in a few months time.  It lasted four bloody years. 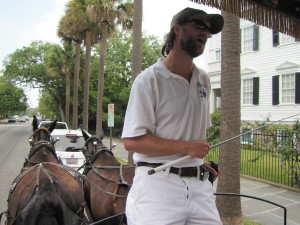 Back in Charleston we rode on a guided tour in a mule drawn carriage through the city’s historic district and passed by stately old homes.  As we rode near Battery Park, we observed a solemn celebration of Confederate Memorial Day celebrated each year on May 10th, the day Stonewall Jackson died.

In an awesome marketplace, we watched artisans weave Sweetgrass Baskets and string stone beads for necklaces.  A pretty young student (thanks, Abby!) guided us through the grounds of the beautiful College of Charleston.  We toured Middleton Place, a rice plantation on the banks of the Ashley River.  Everywhere, we ate fresh seafood – at a rural dive, at a crab shack near the ocean, and at our beach house.

At the Public Library and the old Court House, I scrolled through spools of old microfilm to copy family history. 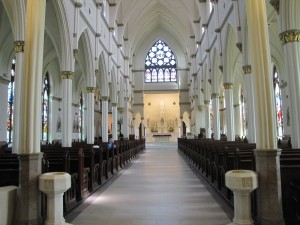 We shot pictures of the house where my husband’s great-grandfather once lived, and then said a prayer at the church he attended. At Magnolia Cemetery we found his grave, and said another prayer.  Nearby lay the dead of the sunken Hunley, yet another reminder of The War.   Back at Folly Beach the ocean called.  We strolled barefoot over smooth sand letting the warm waters of the Atlantic wash over our feet.  Reluctantly, we said goodbye.

From Charleston we flew across green mid-western farm fields to Chicago’s O’Hare Field then on to the brown desert sands surrounding Las Vegas. A myriad of languages and accents sang out at airports.  The final leg of our journey took us to the wonder of San Francisco, a vibrant diverse city as beautiful as Charleston but different.  So different.

On Saturday we drove across the Golden Gate Bridge to San Rafael to attend a joyful college graduation on the peaceful grounds of Dominican University. 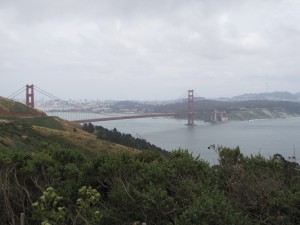 On our trip back to the city, at the top of a winding hilltop we gazed on the magnificent Bay that leads to the Pacific Ocean.  Early Sunday morning we strolled a few blocks to watch the fun of the Bay to Breakers race.   Serious runners, walkers, and costumed party-goers run 12 kilometers from the San Francisco Bay to the waters of the Pacific Ocean. This year is the 100th anniversary.   And everywhere, we enjoyed gloriously fresh food – fruits, veggies, crepes, seafood.

I’m on overload  now.  In ten short days we traveled from sea to sea.  Soon comes the return to the reality of daily life.  The best part of course, has been visiting with loved ones.  Aside from that has come a deeper appreciation for this land. Travel does that.  America is vast and her stories are boundless.  So much still to discover, and record. ∞