In the few years since it started, RWA’s Mystery & Romantic Suspense Chapter’s (aka/Kiss of Death) Pre-Conference Tour at RWA National has earned a stellar reputation.  This year’s tour to the Sandy Hook, NJ U. S. Coast Guard Station upheld that tradition of excellence. 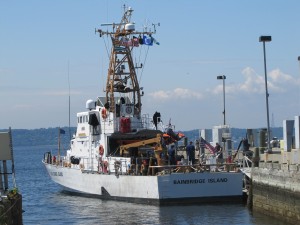 Promptly at 8 am Monday, over forty KOD members met in the lobby of the NY Marriott Marquis and boarded a chartered bus for the 1-1/2 hour trek down the coast to Sandy Hook.  We were greeted by an enthusiastic team of men (aka/Alpha Heroes) who oriented us to the United States Coast Guard.

The Coast Guard formed in 1790. It is the oldest continuous sea service in the United States.  Today there are roughly 39,000 members in service, less than in the NYPD.  Among other duties they conduct Search & Rescue, monitor buoys, perform Homeland Security missions, and conduct law enforcement including fisheries and recreational boating safety.  They believe in “Honor, Respect, and Devotion to Duty.” 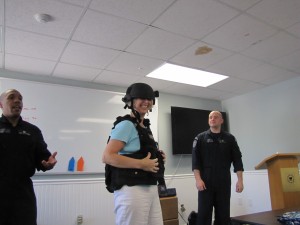 After our initial orientation, including a short film about training recruits, we split into groups to rotate through key areas of the station.  In a classroom, our group learned more facts before going outdoors to board and tour the Bainbridge Island, a 110-foot Cutter, one of the station’s “workhorses”.  The Captain of the boat patiently answered many writer-type questions, including “What weapon would be used if someone wanted to take out the bridge of a cutter?” 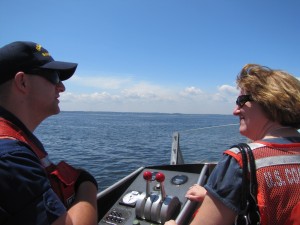 We walked back toward the station.  While waiting to see a Rescue helicopter in a flyover, we browsed through the station’s store, run by two CG dependents.  The store is stocked with everything from uniforms to candy bars.  We then went back into the station for a demonstration of some of the equipment used by the USCG.  Afterward, we boarded a smaller boat for a 15 minute cruise that included an unexpected demonstration of a “man overboard” rescue. 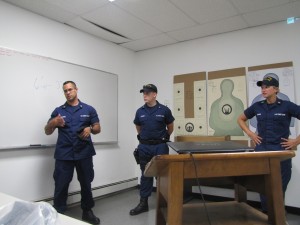 After lunch we were escorted back to the artillery range for an indoor presentation of various guns and artillery training conducted by the Coast Guard.

The Coast Guard’s purpose is to save lives.  They use only the necessary force to stop a situation.  Weapons and bullets were explained and they passed around mock representations of two guns so we could judge their weight.  Again, as in the station and on the boat, the young men and woman professionally answered numerous questions.

Our tour concluded with a brief talk about some real life situations at the main station.  Debbi Ward, KOD tour coordinator, passed out red and black “thank you” gift bags of authors’ books and chocolate to those of the Sandy Hook U.S. Coast Guard who’d so graciously shared their time and knowledge.

Back at the Marriott, members of the Kiss of Death gathered for an evening dinner of pasta, roast turkey slices served with a delicious blend of seasoned sliced brussel sprouts and mushrooms, and some outstanding desserts.  The Annual General Meeting followed chaired by President Melba Moon. 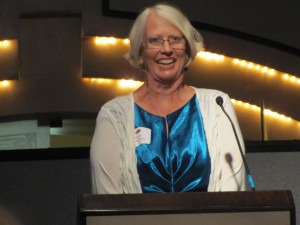 Our evening concluded with a fine speech by KOD member Nina Bruhns, award-winning author of over 25 books.  Ms. Bruhns discussed her own writers’ journey and the emergence of the Kiss of Death chapter to the present day. “What a great time to be a writer,” she said.  Over the next few days, she added, we would be hearing things such as “Smash words” and “Kindleize.”  “Writers can now be in charge of their own publishing,” she said.  “A whole new world of possibilities is opening.”

My personal thanks to men and women of the United States Coast Guard at Sandy Hook, and to the Board of KOD for an outstanding and well-organized day.  ∞