In 1993 two friends had a dream.  Anne Kelleher (Bush) and Lorraine Stanton sought to form a group in the Lehigh Valley for writers who shared the goal of writing and publishing book length fiction.  The first meetings of the Greater Lehigh Valley Fiction Writers’ Group (GLVFWG) were held in Lorraine’s living room in Phillipsburg.  Although a novice, I was pleased to be among the first five attending.  For a short while, I served as President of the fledgling group.

As the group grew, we formed strong critique groups. Soon we relocated to a private club.  Then, seeking to control luncheon costs, we moved on to a public library.  We discussed becoming a chapter of Romance Writers of America (RWA), but it was felt that would exclude writers of other genres who had already joined. At some point “fiction” was dropped from the group’s name.

There were growing pains along the way, as members and officers came and went.  Within a year or so, personal reasons caused me to resign my position.  I subsequently left the group.  My writing dwindled.

When I started seriously writing again, my interest had shifted to RWA. I was, after all, writing romance and I liked the support of the national organization.  Still, over the years I’ve watched GLVWG.

The group still meets in the same library, not far from my home.  It also hosts a solid spring conference in March.  The Write Stuff brings together writers of all genres.  But January’s meeting was on Indie Publishing, a hot topic now, and one I’m delving into. And so on Saturday, I attended.

After the business portion of meeting, writer Joan Zachary gave an inspiring mini-presentation on using your camera every day.  She advocated always having a small camera at hand, and to shoot every day.  She’s done this for the past year and posts on Flickr.  Over time, she said, story ideas emerge from photos taken.

I love this day by day mini-goal, a kind of photo journal.  So today around 4:20 pm, when the sun was in the western sky, I took my camera outside and shot a picture of our bird feeder.  To me, it’s a sign that spring is coming, even if it is only late January.

Saturday’s main speaker, Bart Palamaro, gave a superb talk – Indie Publishing 101 – what it is and isn’t, the current state of publishing, finances, skills needed, legal matters, and so on.  The primary areas to “hire out” in Indie Publishing are editing (finding a genre specific editor), and possibly cover design.  He referred us to many online sources and links.  The best rule of marketing an Indie (or any) book, is to write a good book, then another, then another.

After lunch, Bart led about twenty-five writers through an informative, well-organized two-hour presentation on the nitty-gritty, step-by-step process of actually publishing a book on Amazon KDP.   Excellent!

So good to see the growth and maturity of this group that was once only a dream.

On February 1st I’m starting a new project.  Under the guidance of Nancy Herkness, twenty-seven New Jersey Romance Writers have vowed to each write 30,000 words in February. We call ourselves the 30Kers. Using a Yahoo Groups loop, we’ll keep each other motivated, and submit our number counts along the way. It’s new stuff, no editing as we go.  The goal is to simply produce.  Nora Roberts‘ words are a favorite….”You can fix anything but a blank page.”

To all my writer friends, thank you for sharing your knowledge, your ideas, and your friendship.

Since the publication of their first book in 1995, Jim and Nikoo McGoldrick (aka/May McGoldrick, Jan Coffey, and Nicole Cody, among others) have published over 30 books.  On Saturday, September 17, Jim and Nikoo spoke to the New Jersey Romance Writers in Iselin, NJ about their writing journey.  Their workshop’s title was Mining Your Backlist and they presented a wealth of information about self-publishing. 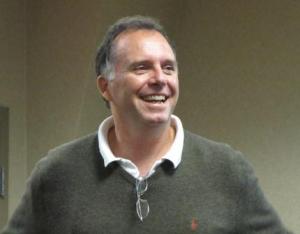 In this entertaining and highly informative session, Jim and Nikoo walked us through the reasons for self-publishing and the steps required.  Using hard facts and figures, they shared their own story and what worked for them in re-publishing their books.

In 1995 Jim and Nikoo’s historical romance The Thistle and the Rose was a double NJRW Golden Leaf winner for Best Historical and Best First Book.  They went on to publish more historicals, contemporaries, suspense novels, and thrillers.

In recent years they’ve struggled to get their rights returned on out-of-print works. It has been a long and arduous process, five years with one house.  With another, it has now been seven years and they’re still working on it.

In addition to their backlist, the pair have self-published other books. One of these, Ghost on the Thames by May McGoldrick, is a Charles Dickens sort of book, complete with ghosts, set in Victorian London.  Another work by Jan Coffey is Step Write Up, a workbook for hands-on teaching of 21st century creativity skills. Three thousand copies were purchased by the New York Department of Education.

Jim and Nikoo now have 21 works available on the Internet. For roughly every one hundred e-books sold, they may sell one print on demand.  Their e-books are available through Smashwords, Amazon Kindle, Barnes & Noble, and others.  Print on demand are mainly through CreateSpace.  There is money to be made in self-publishing but the author needs to be aware of piracy.  And there is no guarantee that the profits will last into the future.

A writer looking to self-publish backlist title/s must first get his/her rights back.  After that, the process is about the same for a published author or a newbie.  An ISBN number is recommended, available either through Bowker’s or an indie distributor (i.e. Smashwords).  A cover follows.  Hiring a professional or someone experienced in cover design is preferred since a good cover can make or break a book’s sales.  The book must be typed on Microsoft Word and well-edited then formatted according to the requirements of the distributor. Pricing must be decided.  And finally, an author must determine “what’s the plan?”.

Self-publishing isn’t easy but by following the guides available online, it gets easier.

Nikoo and Jim shared many marketing tips, such as putting teasers in the backs of books and offering coupons. Traditional methods still apply. You must get your name before the public but without being obnoxious.

A phenomenal presentation from a pair of knowledgeable, experienced, and amazing authors!  Thank you Jim and Nikoo!   ♥